Zoom Free (Basic) vs. Zoom Pro: Should You Upgrade?

Confused about the differences between the paid and free versions of Zoom? Learn everything you need to know right here.

You’d be amazed at the sheer number of questions we receive regarding the differences between Zoom’s free (officially called Basic) and paid (formally known as Pro) options. Many of these queries come from viewers who watch our tutorial videos and wonder why the features they see on their Zoom apps are not exactly the same as the ones we show here.

The “new normal” has required many of us to familiarize ourselves with the features of Zoom and other video conferencing software, especially for conducting our business meetings and family gatherings online.

And at a time like this when every expenditure counts, it’s important for you to know exactly what you’re getting from the free version of such a critical app, and if it’s really worth shelling out those extra dollars per month to go Pro.

So that’s what today’s tutorial is all about — and quite frankly, the answer might surprise you.

So to start, just go to the Zoom pricing page for your country. The prices will depend on your location; I’m in Canada, so all the pricing is in Canadian dollars. The page will have a list of all the different services included in each package, and you’ll notice that there are three packages on the page, suited to the size of your business. 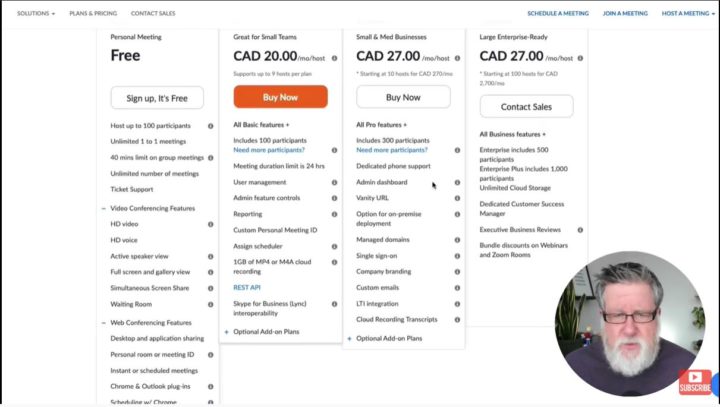 As the pandemic continues, expect that there might be some further changes to security in both versions. Essentially, though, there are just three major differences between the free and paid versions.

Looking at the functionalities, you’ll notice that across the board, the features are basically identical. When it comes to calls in particular, all versions come with unlimited one-on-one calls. This means that when there are just two people in the call, there’s no time limit; additionally, there’s no limit to the number of times you can call a person.

However, when a third person gets added into the mix, things change. The call can only last for a maximum of 40 minutes. It doesn’t matter if there are three, thirty, or even a hundred people in the video conference; it can’t last longer than an hour when you’re not on Zoom Pro.

Meanwhile, the paid version removes that restriction, regardless of the size of the group. That’s right; basically, the conference can go on for as long as you want. 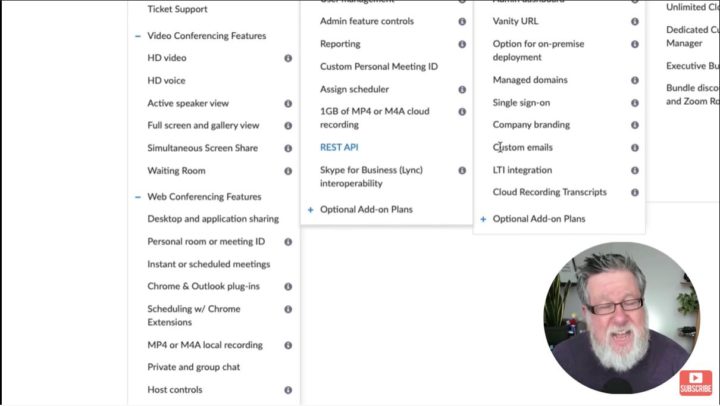 When you scroll down the Features page and look at Web Conferencing, you’ll notice a wide range of features. One of the features you’ll find in Zoom Basic is the ability to record all calls, but only to your computer. With the Pro version, however, you can record directly into the cloud, which you can easily share with other members. Take note, though, that you can only save up to a gigabyte’s worth of space, so that’s maybe two meetings of average length. Additionally, you can purchase more storage if you need to store a lot of meetings on the cloud. Otherwise, you’ll have to check your recorded calls and delete them from time to time.

The third big difference, which isn’t something you’ll find on the Features page, is an upgrade that Zoom has put into place in order to address the security concerns that many people have with calls being routed through different data centers.

For Zoom Pro users who are worried about this, it’s possible to have your calls routed through specific channels; for example, North America and European data services, instead of the ones based in China. Basically, the paid version of Zoom lets you determine which data centers handle your calls. Take note, though, that there may be a performance hit if you turn off a lot of data centers.

Zoom Free vs. Zoom Pro, Side by Side

Here’s what the free and paid versions of Zoom look like, side by side: 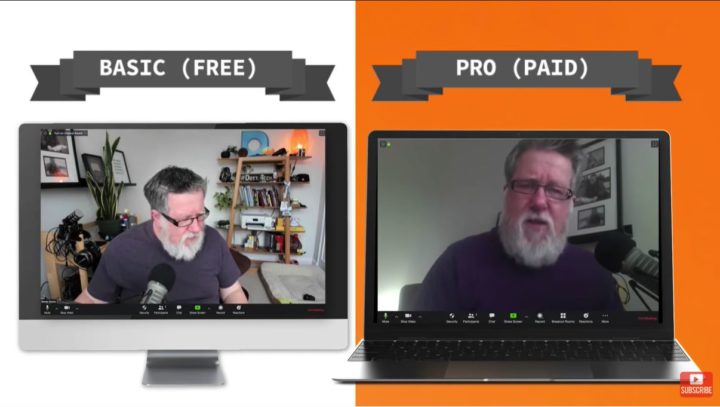 If we take a look along the bottom, there are a few extra menu options on my Paid version. However, that doesn’t necessarily mean that some features were intentionally left out of the free version, as you’ll see later on.

Now, I’m using my newer computer (with better specs) to run Zoom Basic, while my older MacBook is running Zoom Pro. I did this because I want to illustrate something to you.

If I go in and take a look at my video settings on both versions, they’re mostly identical. Until we reach the options for virtual backgrounds, that is.

A lot of people mistakenly believe that because they’re only running Zoom Basic, they don’t have the spiffier virtual background options, and are just limited to static images

In reality, Zoom looks at the hardware that you’re using. Based on your computer’s processing power, it makes certain features available or unavailable to you.  In other words, if your computer can’t handle it, Zoom won’t give you the option to do it, regardless of whether you’re on the free or paid version. 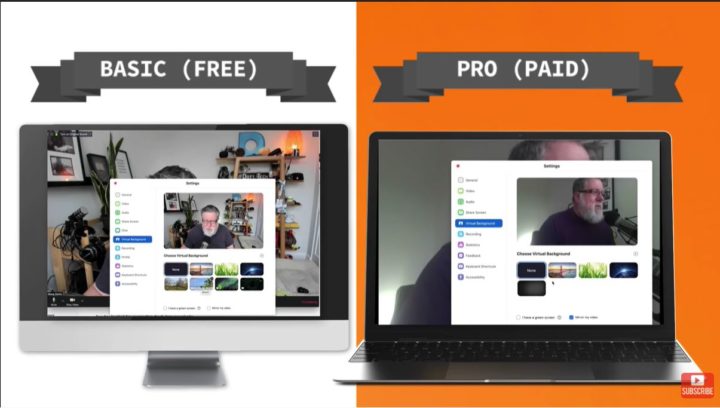 Observe: Even though I’m on the paid version, because I’m using my older MacBook, I can only use static images as my background. Meanwhile, on my more powerful computer, Zoom Basic lets me add video backgrounds as well, simply because its processing power can handle it.

Oh, and by the way, you can check out our green screen tutorial here if you’re interested to know how you can enhance your virtual background for calls! 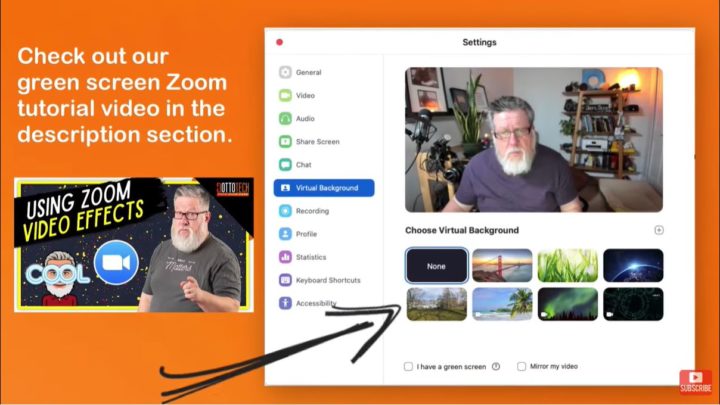 Next, let’s look at Zoom’s security features on both Basic and Pro.

Again, the features are identical between the two: locking the meetings, turning screen sharing and chat access on and off, allowing participants to name and rename themselves, and so on. The screen sharing options are virtually identical, too! 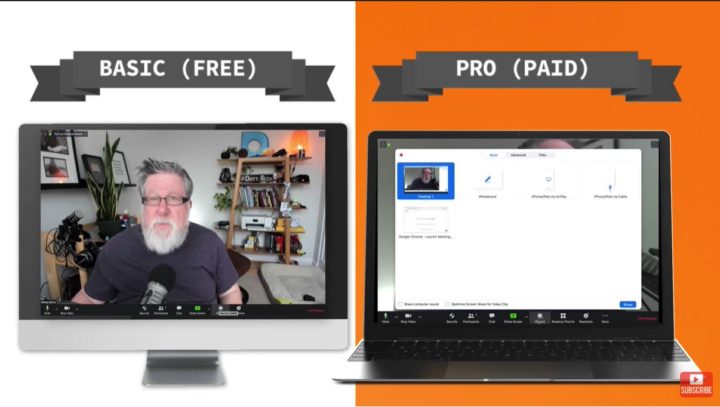 The recording options are where things differ, though. As mentioned earlier, the free version only allows you to record to your local storage, while the Pro version lets you save your recorded calls to the cloud. 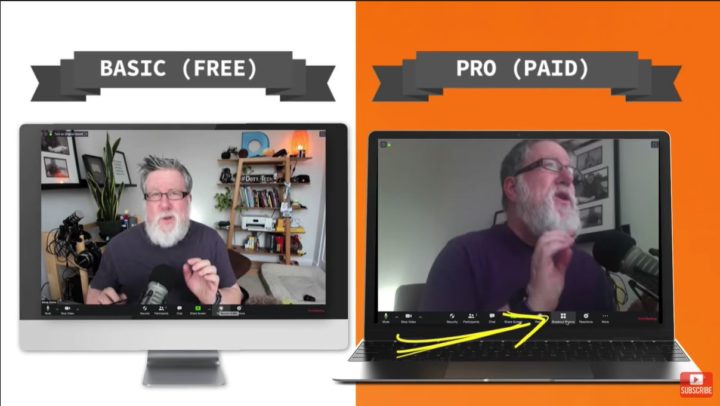 If you’re using Pro, you’ll notice the Breakout Room button on the bottom menu. It’s a useful and interesting feature: For meetings with large people, you can break larger groups into smaller, separate rooms and let them do group work.

Before you start thinking it’s a paid-only feature: actually, it’s also available in the Free version. The only difference is that it’s not enabled by default.

On Zoom Basic, go into Settings and scroll down. You’ll notice that you have all the same features as the paid version. Near the bottom, you’ll see the Breakout Room option, which is not switched on! Once you turn it on, it will be available to you there in the menu the next time you start a conference call. 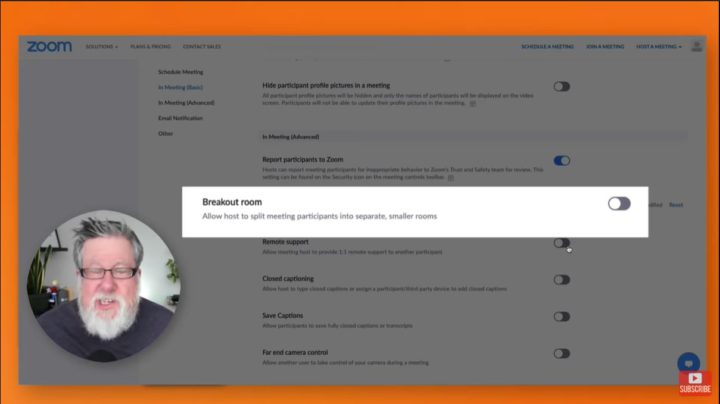 Another thing: Whenever I’m running a meeting, I always like to enable Show Manage Participants. This is a great window to have open, so you can easily control the flow of the meeting. 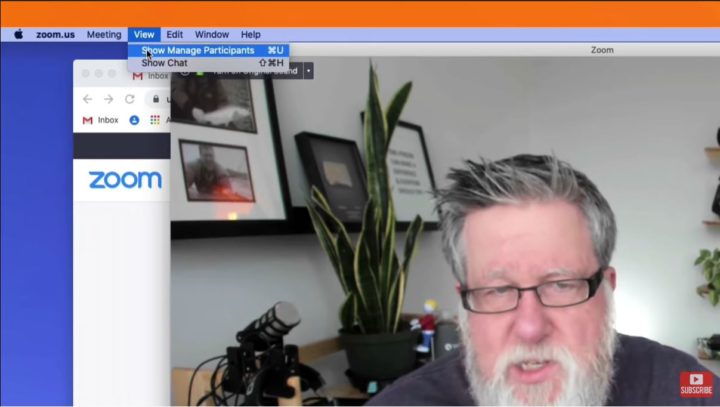 In the free version, you can create a link to invite people to your meeting. The paid version shows you a few more options, though, like automatic integration into email. Also, both versions include a password, should you want to password-protect your meeting. 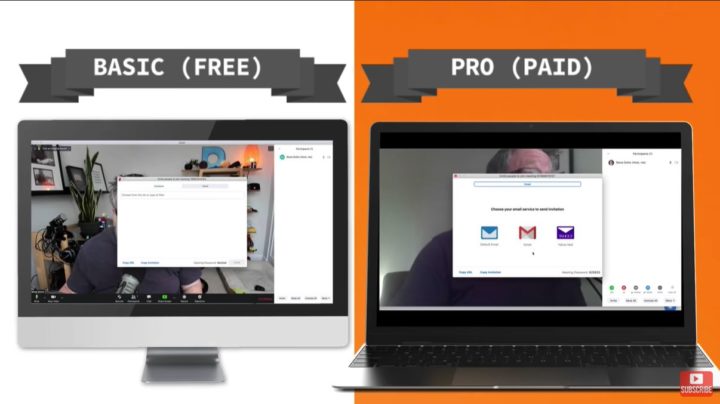 Along the bottom of your participants list in Zoom Basic, you’ll see the option to mute or unmute everyone else in your call with one click.

In Pro, though, everyone has access to icons that allow them to indicate agreement or disagreement, perform a “show of hands,” and other actions. These facilitate dynamic interaction and feedback during the meeting. It’s a nice feature that most people don’t really notice in Pro, and that I haven’t been able to find in the Free version. 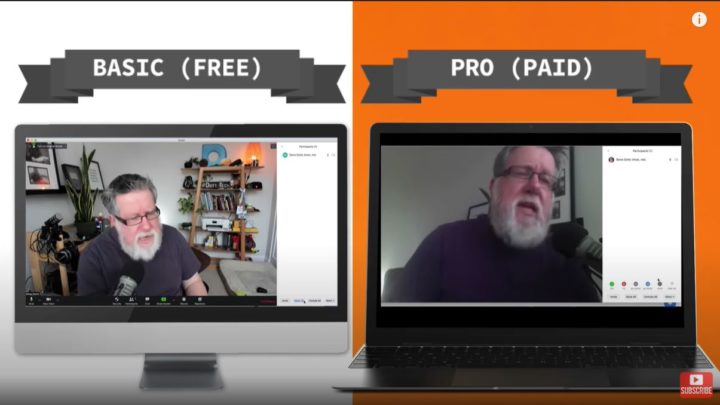 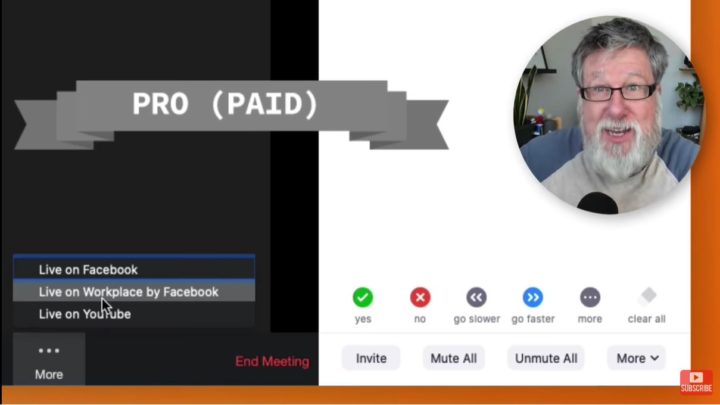 So, final verdict: Should you spend money on Pro on a monthly basis?

I think it’s worth it, if only for the extra time you can spend on calls. However, if you’re the kind of host who likes to keep video conferences short and sweet, you’ll find that Zoom Basic is more than enough for your needs.

Learn the difference between Zoom Basic vs Zoom Pro

- Okay, I'm recording this and I'm having a video remorse because I sent you the video yesterday, which is the difference between Zoom free and Zoom paid, right? And I forgot this. I'm recording this and I'm gonna send this to you. So I forgot that in the paid version of Zoom, you can broadcast live to Facebook or to YouTube or to Facebook's Workplace. So you can take--

- Yeah, you can and I completely forgot to mention it. Here I am looking like a, well, looking like I just got up 'cause I just got up, but here it is. So can you take the video that I made you edit that you were uploading to YouTube right now and can you add this little bit that I'm sending you right now? And then can you find a way to fit it in the video nicely for me?

- That's awesome. That's just awesome. Now, I would love to hear more of your comments and questions. Did I miss anything? Did I misrepresent something? I know you will tell me in the comments, and I promise you, I read each and every comment even if we don't have time to reply to each and every comment, but I appreciate you asking the questions and letting us know how we're doing. If you've not yet subscribed to this channel, what the heck are you waiting for? We have a whole series of videos on using Zoom, which I encourage you to watch at your leisure. Please, if you've enjoyed this video, give us a thumbs up, Like the video, share it with your friends and family. And until next time, I am Steve Dotto. Have fun storming the castle.

Do you need to

STEP up your productivity?

If your answer is YES, then you should sign up to our free weekly Webinar Wednesdays to go behind the scenes and get tips and tricks on how you can 10X your productivity and become a better content creator.