Google has released its online meeting tool, Meet, for free to everyone with a Google account. But can it replace Zoom video conferencing? Read on.

You may have already heard about Google releasing its own online meeting tool, simply called Meet. It’s free for anyone with a Google account, and you just can’t help but think that it’s an apology for the limitations of Hangouts.

However, while it’s light years ahead of Hangouts in terms of ease of use and user interface, when it comes to actual features, Google Meet is still pretty basic.

Which begs the question we’ll answer today: Is it a viable alternative to Zoom? 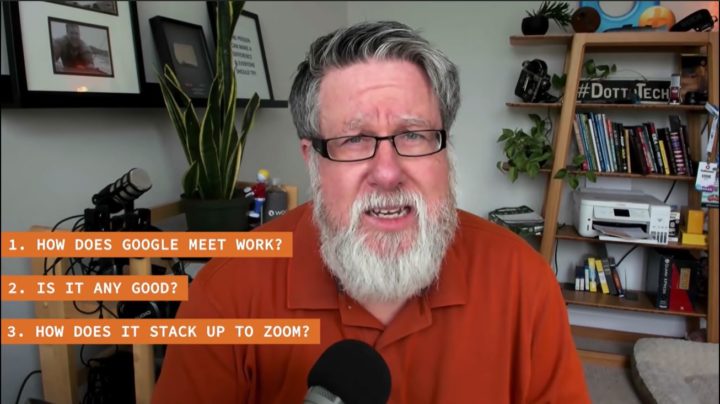 Getting To Know the Google Meet App

Now, as is often the case with Google tools, there are a couple of ways you can get into Meet.

As Google started rolling out access to Meet a few months ago, some Gmail users found a Start a Meet Meeting option in their email sidebars.

This wasn’t the case for me, so to make the video tutorial, I had to manually visit the official Google Meet site. There, anyone with a Gmail account can start a premium video meeting, now free of charge. 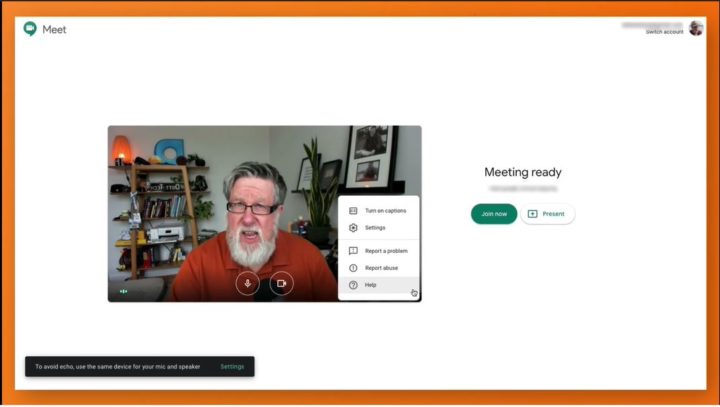 Starting a meeting generates a rather complex, password-like code that can allow anyone possessing it to join the video conference. This is Google’s way of  preventing Meet-bombing (basically the equivalent of Zoom-bombing, which is an admittedly annoying practice). 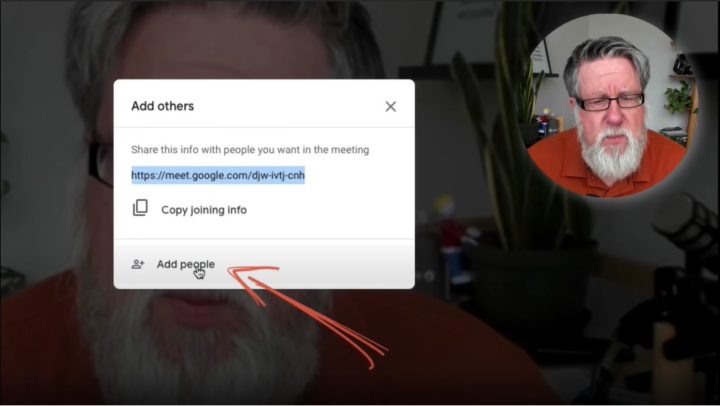 As you launch the server, Meet will check out the resources on your computer. Now, I had a few issues with this, but I’ll get into that later.

When you visit your settings, you will see three tabs: Audio, Video, and General. This is where you’ll want to set up which microphone you want to use, which speakers you want to listen to, and which camera will be capturing your video. These options are quite useful if you have a ton of options plugged into your laptop. 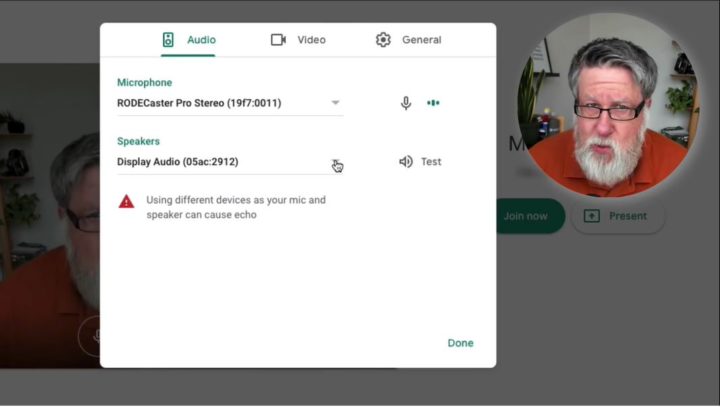 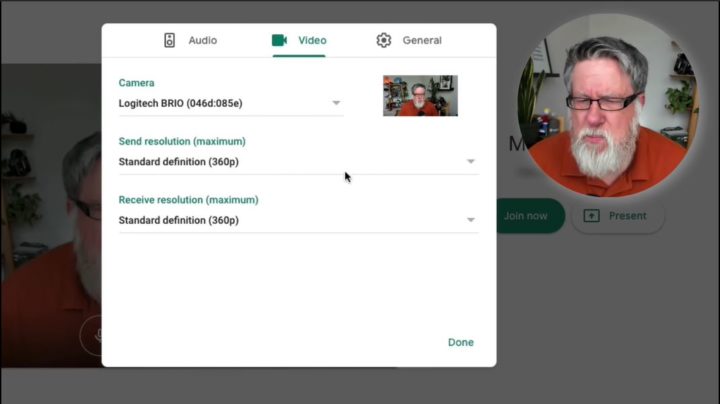 You can even change the resolution here. If you have bandwidth issues, you might want to leave it at standard resolution. Otherwise, feel free to go high-resolution.

This is what a video conference on Google Meet looks like: 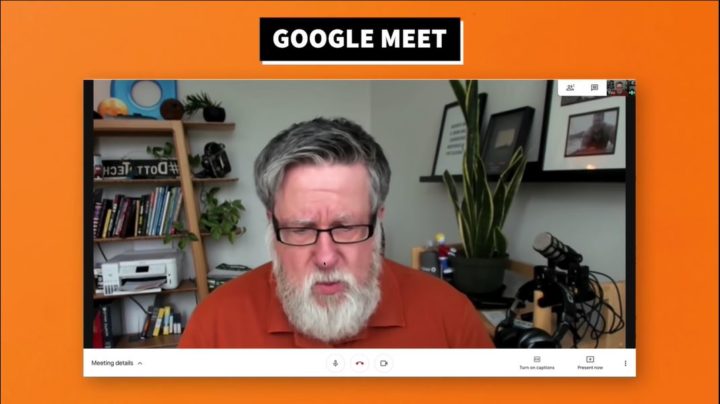 As you can see, we’ve got a fairly stripped-down management console here. There aren’t a lot of things that you can click, and it obviously has nowhere near as many tools as Zoom does. Still, what it does have is decent.

Here at the top of the screen, you’ll see the people who’ve joined the meeting. There’s a basic chat window that will allow you to talk to them, and you can even see your own feed in a thumbnail view at the top. 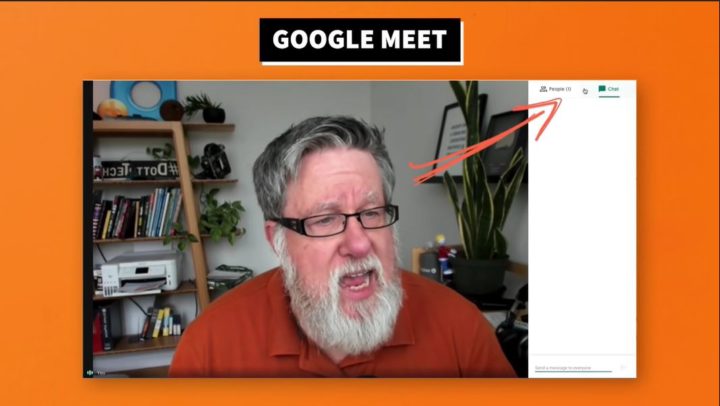 At the bottom of the screen is where most of the activity will take place. There are options for changing the layout or view—recent additions that are very handy if you miss Zoom’s popular Gallery view. 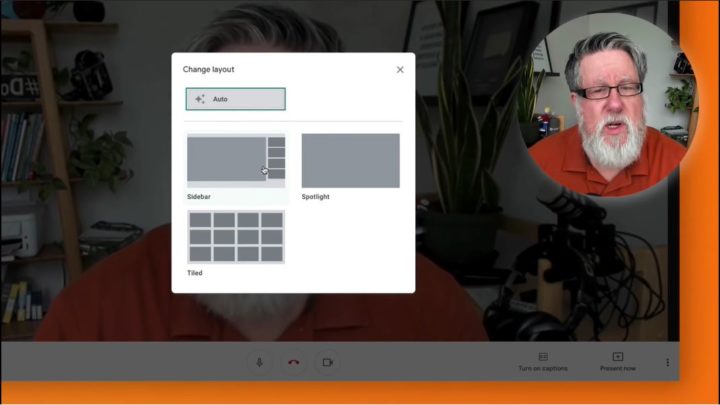 Overall, it’s fairly basic, but it gives you the main control of viewing everyone or spotlighting just one person while everyone else is watching, webinar-style.

You also have the ability to go full screen on your computer, so it dominates the entire screen. 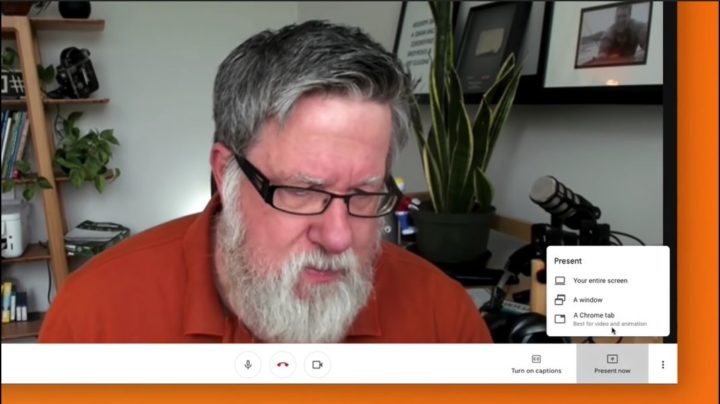 From here, you can also go back to your audio and video settings.

Oh, remember those issues I mentioned earlier? Shockingly, my audio and video settings were reset! This can be a pretty annoying predicament, so you’ll want to check that out and make sure that all settings are correct before your actual broadcast.

Just like Zoom, Meet comes with screen sharing options, whether it’s for one of your screens, your slide show presentation, or a tab within your browser. It’s yet another simple feature that covers the bare minimum of what you need Meet to do.

How Our Google Meet Trial Turned Out

So, my very small team and I tried to conduct a meeting using Google Meet. 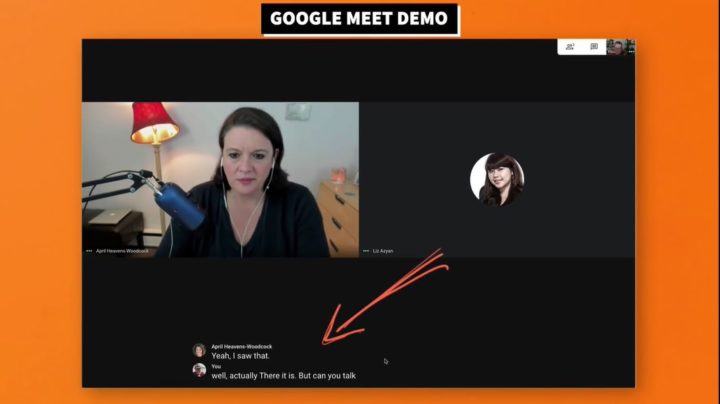 Sadly, we discovered a problem after we recorded the demo. The audio from my team members didn’t get captured in the video file as I was recording. Also, I recorded the call separately because the default version of Google Meet has no recording option; however, I learned that the feature is apparently exclusive to G Suite users.

I know I’ve been talking about how plain Google Meet is, but it has one feature that really impressed me: The closed captioning option. As you’ll see in the video, there’s a slight delay in the way the captions would come out after April, Liz, or I would speak. However, I have to admit that the quality and speed of the feature was truly remarkable, especially considering how everyone on that call had a neutral accent. 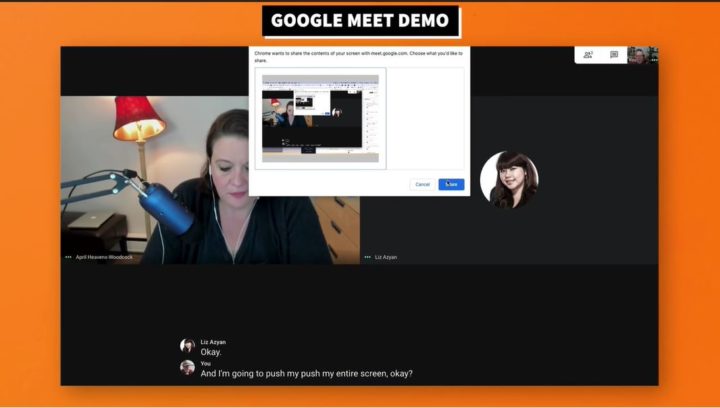 (And yes, in case you were wondering—it does filter out swear words.)

Unfortunately, this raises a bit of a red flag, and I’m sure it’s not just me. If you think about it, Google is essentially capturing our conversations as text now, which it can then crawl and search later on. Basically, this is just now another data type that they will, in some way, have the ability to use in profiling each of us.

As Google Meet is a business meeting tool, being able to schedule is very important. Fortunately, you can do this even if you don’t see the Meet app in your mail. 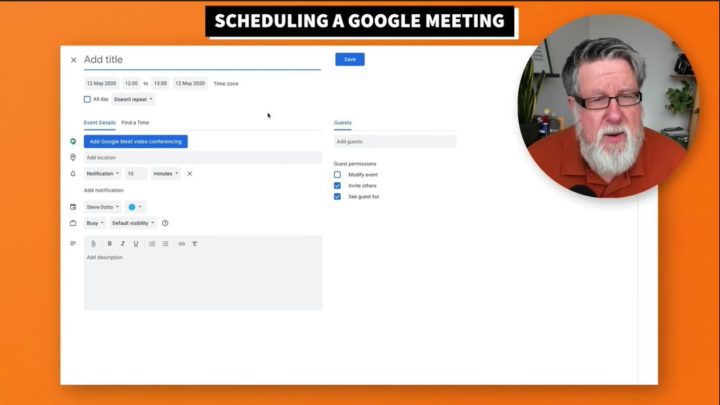 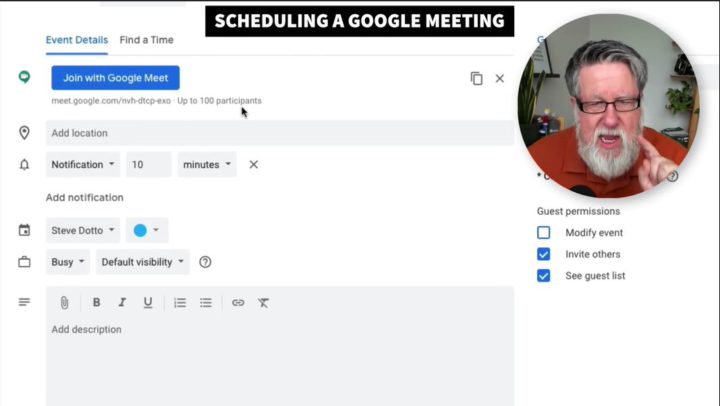 The meeting will appear as a line item on the calendar, and every participant will have access to it.

Cutting to the chase, though, Google Meet is not as good as Zoom. But you can certainly use Google Meet and be as productive as if you were using Zoom, if you only need the basics.

Both are free, relatively easy to use, and integrate well in the various digital ecosystems. Furthermore, Zoom requires you to download an app, while Meet is browser-based.

Support is (unsurprisingly) nonexistent for both Google Meet and the free version of Zoom. However, paid users on both platforms can expect some level of support, as long as they keep their expectations low. As for privacy and security, only time can really tell if one’s better than the other.

Overall, Zoom has the higher audio and video quality, but Google Meet isn’t too shabby, either. Oh, and if you want to watch the demo for yourself, check it out here.

Do you need to

STEP up your productivity?

If your answer is YES, then you should sign up to our free weekly Webinar Wednesdays to go behind the scenes and get tips and tricks on how you can 10X your productivity and become a better content creator.